Rogue One: A Perfect Piece in the Star Wars Universe

There’s absolutely no doubt that my family consists of die-hard Star Wars fans. It was a big part of my childhood, as well as hubby’s, and we’ve now ingrained it into our children’s lives as well. They both love and fear Darth Vader, are perfecting their lightsaber skills and wish they could have BB-8 for a sibling. Needless to say, we’ve been anxiously awaiting Rogue One, yet wondering how well it would fit into this intergalactic world. I’m thrilled to say that Rogue One is a perfect piece in the Star Wars Universe, and while it would be great on it’s own, also fits in seamlessly.

As I sat with my friend Finding Debra excitedly waiting for the movie to begin, you could tell it was kind of like waiting for Christmas morning for us both. The screen lit up to start, and the whole theater of bloggers and critics went completely silent – it was like everyone was holding their breath for that first moment! Right from the start, you’re pulled into Rogue One with strong, brave characters and a mysterious – yet obviously evil – plan.

Don’t worry, there’s NO SPOILERS here – just a few of my thoughts and some big reasons you HAVE to run and see Rogue One when it hits theaters this week!

You read that correct, I think Rogue One had more laugh-out-loud comedy in it than any of the other Star Wars Films. The whole theater was busting at the seams with the rather chatty droid K-2S0 (voiced by Alan Tudyk) who had a tendency to speak his very calculating mind. As if his comedic remarks weren’t enough, we also thoroughly enjoyed two partners-in-mischief, Chirrut Îmwe – who’s blind, yet a remarkable fighter with a strong tie with the force – and his buddy Baze Malbus, who’s a gruffy ol’ teddy bear with one heck of a gun! Flashbacks to the Other Star Wars Films

I guess you could say flashbacks AND a peak into the future. From random appearances of characters from the other movies, and some of the talk that hints for things we know are to come, there’s a lot of fun parts where you just feel right at home tying Rogue One to the other films.

I was thrilled that Star Wars was including more female leads, showing their strength, determination, and ability to lead men into battle. It started with Rey, who we still have much to see from in future films. With Rogue One, it’s Jyn Erso, a rebellious girl who shocks everyone with her ability to make such a difference to a cause she wanted nothing to do with. 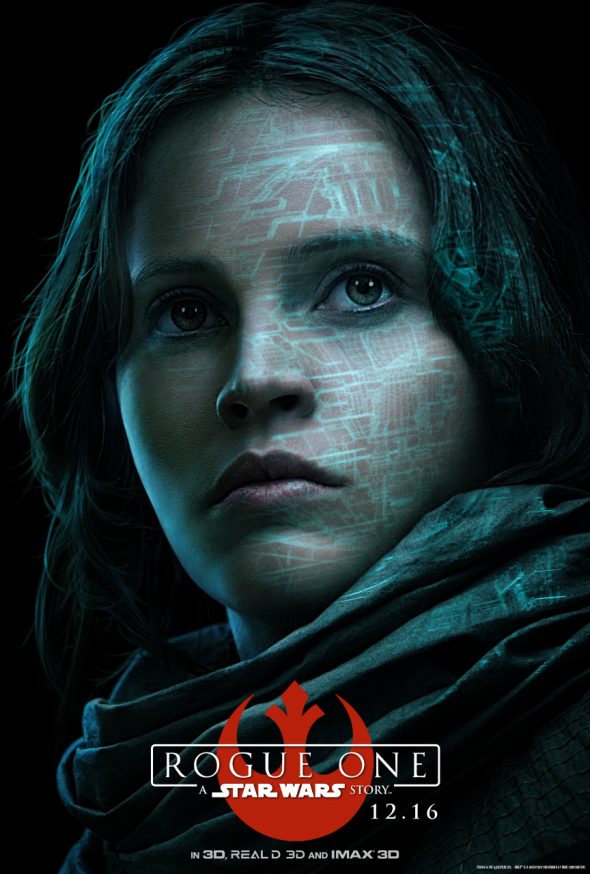 By her side is Captain Cassian Andor, who has a bit more to his past than we originally think, and has a strong commitment to the rebellion he’s long been a part of. Along with other things, he learns that trust has to go both ways if this unlikely bunch is going to attempt the impossible and succeed. For those that know the basic story – or at least the outcome – of Rogue One from the other Star Wars films, you can expect that there will be many tears. Tears of loss, tears of hope and tears simply of touching moments between characters. Like I said, I won’t do any spoilers – but I cried a few times in this movie. Take tissues, just in case 🙂 I wasn’t sure what type or how big of a role Darth Vader would play in Rogue One. He’s in it more than I thought, but still not very much – but where they included him was PERFECT. He still demands attention and fear when he enters a room, and despite all we’ve seen, he still shocks us with his skill and mere presence. And what’s great is that James Earl Jones was back to do that iconic voice!!!

I absolutely LOVED this film, and can’t wait to take my whole family soon. Yes, I believe it’s fine for kids who’ve seen the other films – there’s action and fighting, but no more so than the others. I already know their favorite character will be that spunky droid K-2SO, but I’m curious who my hubby will pick. They’re all incredible, with such a well-made cast. Head out and nab your tickets for Rogue One so you can see it when it hits theaters this week!!!